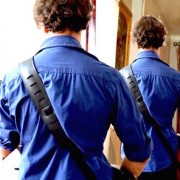 Flew in to Dunedin to play at a football match with a pretty well-known band. Checked in at the hotel, played the show, got up the next morning to have some breakfast, and was surprised to find they were cleaning the carpets, all a bit dank and smelly.

Came back to be told our singer had apparently started to run a bath and fallen asleep with the tap on, which flooded the corridor, causing the ceiling to collapse on the floor below. Even heard rumours there was a ‘lady of the night’ in the room, but a bit hard to believe, wouldn’t she have turned off the tap?

This isn’t really a Tarago tale, but it’s my favourite OZ rock story, as told to me by the sadly late Ross “Bullbar” Hunter, lighting man for Dragon (and youngest, biggest Hunter brother I believe, never any trouble when he was around, even though he was a gentle giant).

A truck full of PA and band gear is driving up the highway in Queensland, through the cane fields. 3 crew in the front, doing an overnighter. The driver falls asleep, the truck careers off the highway, smashes it’s way through the cane , and eventually stops.

The cane, being flexible, stands up again, so that the roadies can’t see where they are.

In the end one of them has a bright idea and climbs on the roof of the truck to find the road.

If anyone wants an opening scene for a movie about the Ozrock boom, I think that’s it. And maybe call the movie  Roadie Island…. the land of gaffa tape, black Lee stovepipes, double four ways, smoking, partying crew guys who  always seemed to work twice as hard as the band, and have twice as much fun.Or probably  just me having half as much fun……

Doing a gig in Batemans Bay with a fairly famous band. The singer has had a bit much to drink, and twice falls backwards into my monitors, spilling my wine (!) and almost wiping me out. Luckily I leapt backwards .

After the second occurrence I turn to the monitor guy an I have a little less “(unnamed singer)” in my wedge?